By kwinson September 7, 2022 No Comments

Historically, a 60/40 portfolio of stocks (60%) and bonds (40%) has, to many, been a standard bearer of asset allocation.  So, it is striking to see headlines quoting a report from Bank of America Global Research showing this broad allocation is on track for its worst year since 1936, having lost 19.4% year-to-date.  Of course, it is not pleasant to see losses on statements compounded by losses on virtually all investments outside of energy.  The past 5 weeks have been a stark contrast to the rally we saw in the month of July, speaking to just how volatile and uneven markets currently are.  Nevertheless, significant changes are occurring in markets, which include:

How these trends play out in the next month or so will likely determine whether we see a rally by year-end or whether we will need to raise cash to protect against further losses.  We are including charts of what we are seeing to provide insight into the potential magnitude of these changes.  To reiterate a point we have made in previous communications, discerning noise from information that affects the direction of markets is challenging in the heightened animosity we see both in our country’s political discourse and the collapse of globalization.  Therefore, it is essential to note that all is not bad.  Think of record job openings, slowing (though still too high) inflation, and significant corporate and personal cash reserves that may buffer a slowdown or recession.

We see this most clearly in the exchange rate with the Euro, which has dropped below parity (1 Euro < 1 US Dollar). However, what may not have been apparent is the dollar is at 20-year highs, a trend not just isolated to the Euro, but making new highs versus multiple global currencies. 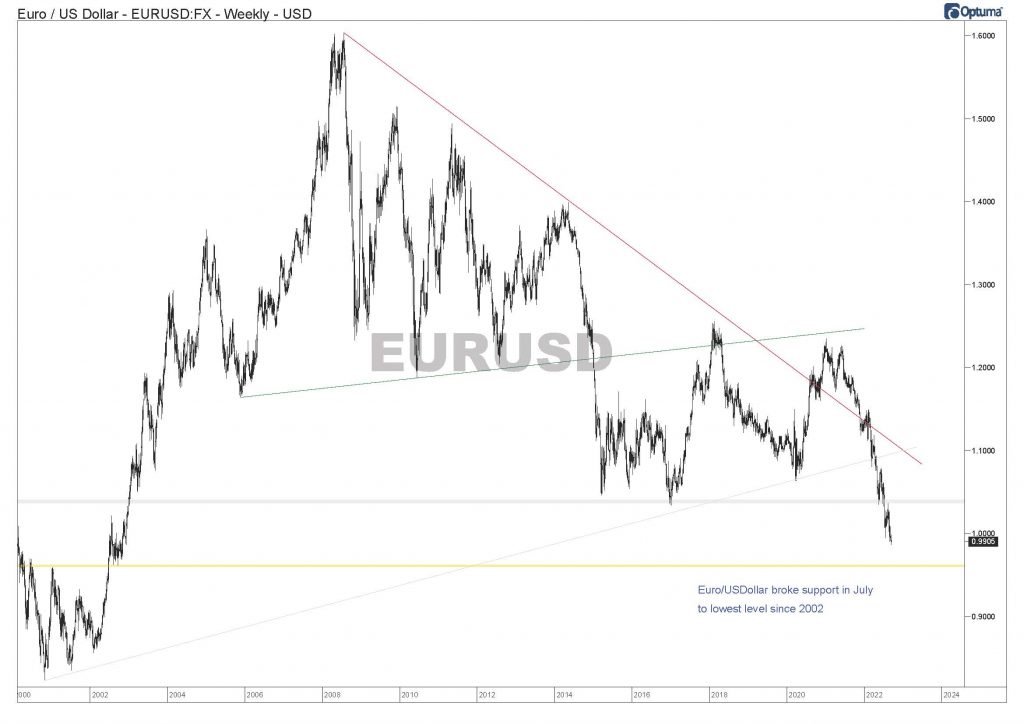 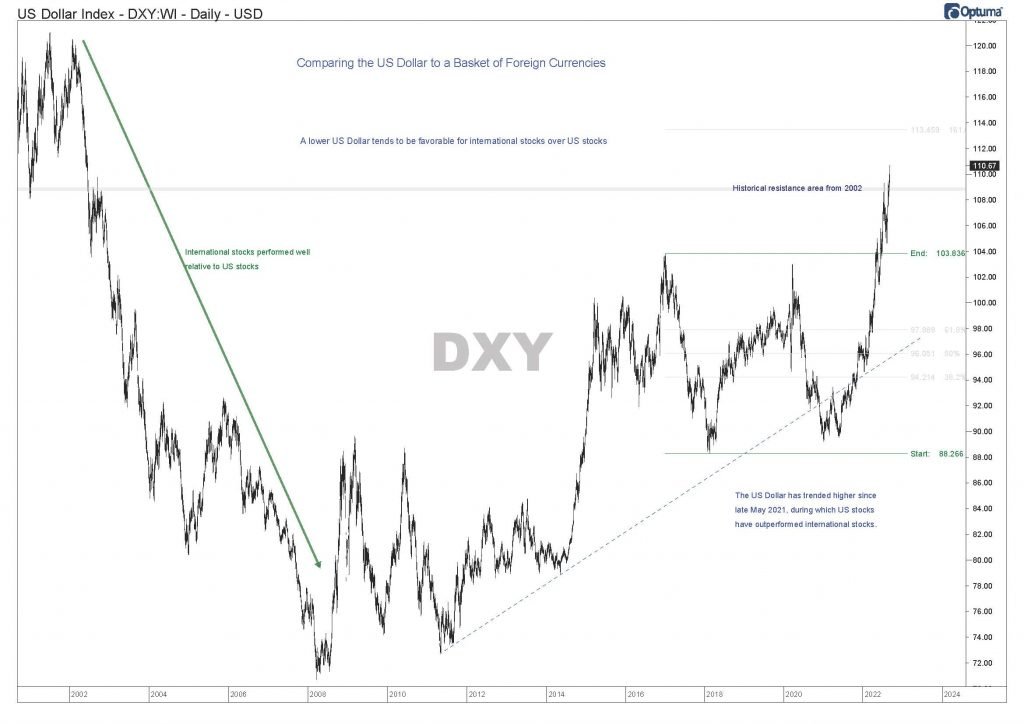 Moreover, there are interesting correlations between dollar strength and asset class returns:

Prior to recent months, we experienced an over 20-year period of declining interest rates and low inflation.  However, this regime has changed (at least for the time being).  In addition, governments worldwide still have unsustainable budget deficits from the COVID stimulus.  With higher global interest rates, higher inflation, and less ability of governments to add fiscal stimulus, markets will behave a lot differently.  Naturally, we fret about inflation, particularly in our daily grocery store or gas station purchases.   However, looking back over the long term, we have experienced a long-term decline in commodity prices, and many are not back to where they were twenty years ago.  Are we at the beginning of another long-term super cycle of rising commodity prices?  It sure looks like a reasonable possibility.  If so, we need to be prepared to have this exposure in portfolios. 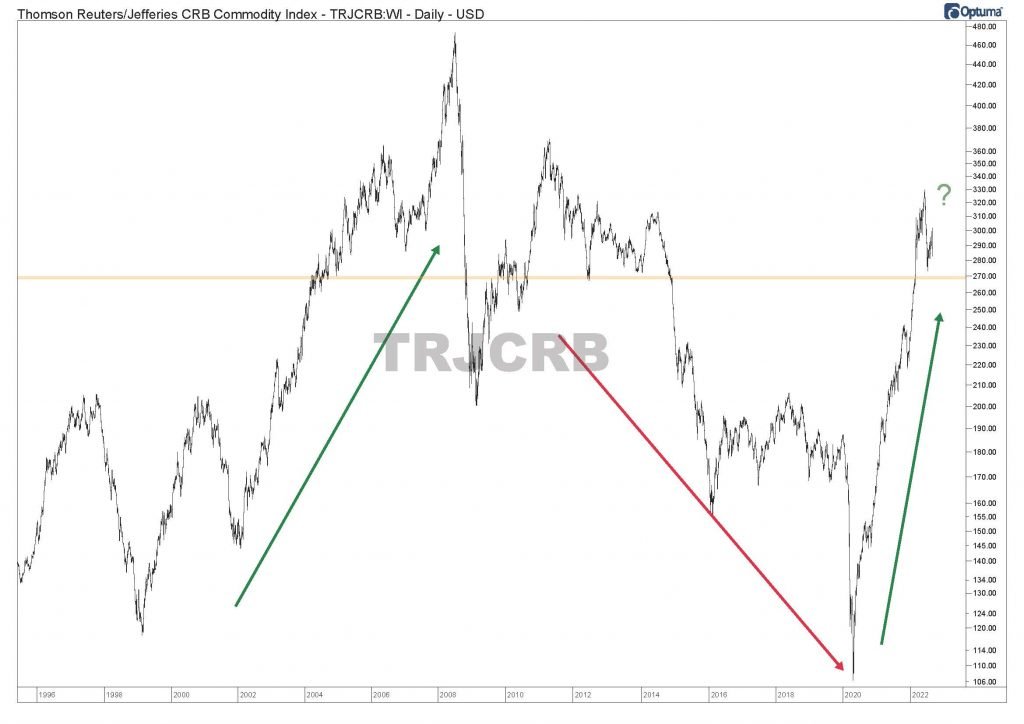 We do not expect a sharp reversal in the broad stock markets to rally to new highs.  Expansionary monetary and fiscal policy will not happen to bail out the market like it did in March 2020.  But markets tend to overshoot on the downside and rally to recover at least some losses.  When asset classes lose 40% or more, we think there is a reasonable probability of seeing a rally, even if short lived during a changing and difficult market landscape.  Two of the most beat-up asset classes, technology (as represented by the NASDAQ index ETF QQQ) and Biotech (as represented by the ETF XBI), declined over 40% and 60% respectively, from 2021 highs.  From the charts, you can see the decline may have found some stability.  Current prices may be attractive if this continues heading into year-end to capture opportunities. 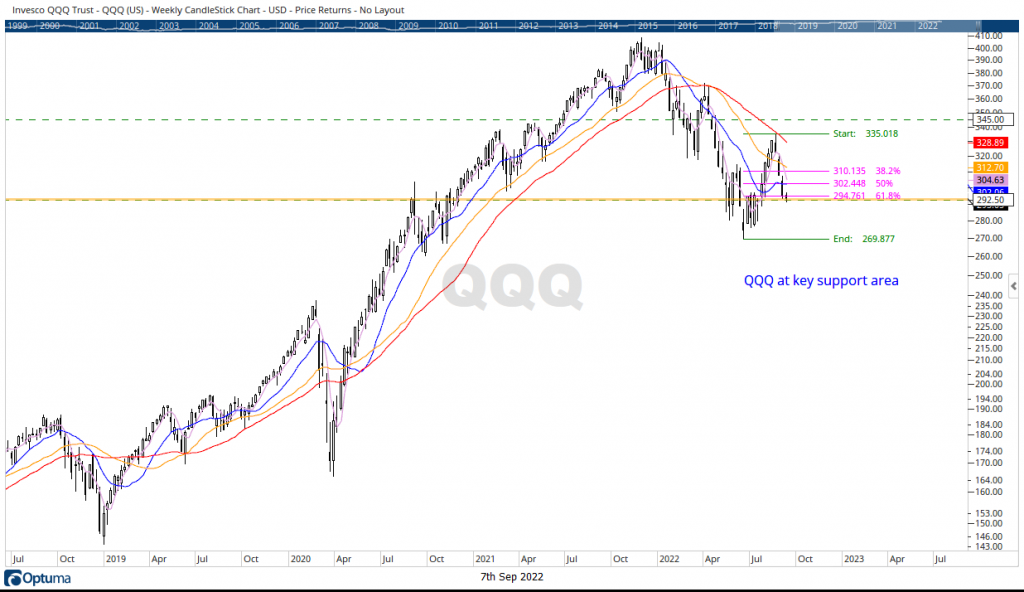 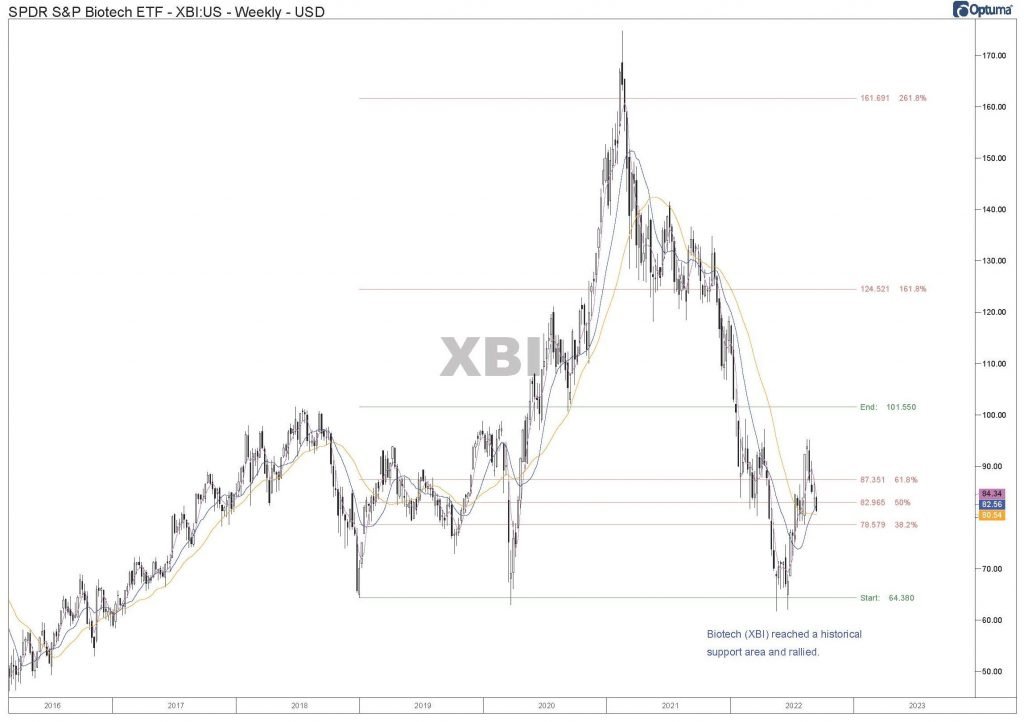 Crisis at Hand—How Does the Ukrainian Invasion Affect Us?